Matt has been wearing, collecting, selling, and servicing Oakley sunglasses since the 1980's.  Oakley was started by Jim Jannard in 1975, in his garage, with an initial investment of $300.  He started selling grips used on motorcycle handlebars.  The material he used to make the grips was later named Unobtanium, and is still used on many of Oakley's current sunglass parts.  Stronger than ever, Oakley makes sunglasses, apparel, and equipment used by pro athletes, civilain enthusiasts, police, first-responders, and military.

The most coveted Oakley sunglasses are called X-Metals.  Starting in the 1990's, Oakley wanted to make cast titanium eyewear that was indestructible yet stylish.  Other optical manufacturers dismissed the idea, even going as far as saying it was impossible, and couldn't be done.  Oakley did it.  Titanium must be heated to 3600°F to melt for casting.  This is extremely dangerous, and employees were injured during the making of these glasses.  27 different machines were created to produce one model of Oakley X-Metals, the Romeo (worn by Tom Cruise in Mission Impossible 2).

Oakley ended the manufacturing of X-Metal sunglasses in 2012, making them highly-sought-after collector's items.  Here are the 8 different original X-Metal models.

Some enthusiasts specialize in polishing the titanium X-Metal models, for a more flashy look.  Some of the X-Metal models were originally offered by Oakley in a polished version, but some were not.  After some time, effort, and persistence, Matt was able to assemble a full collection of all 8 X-Metal models in a polished finish... here they are. 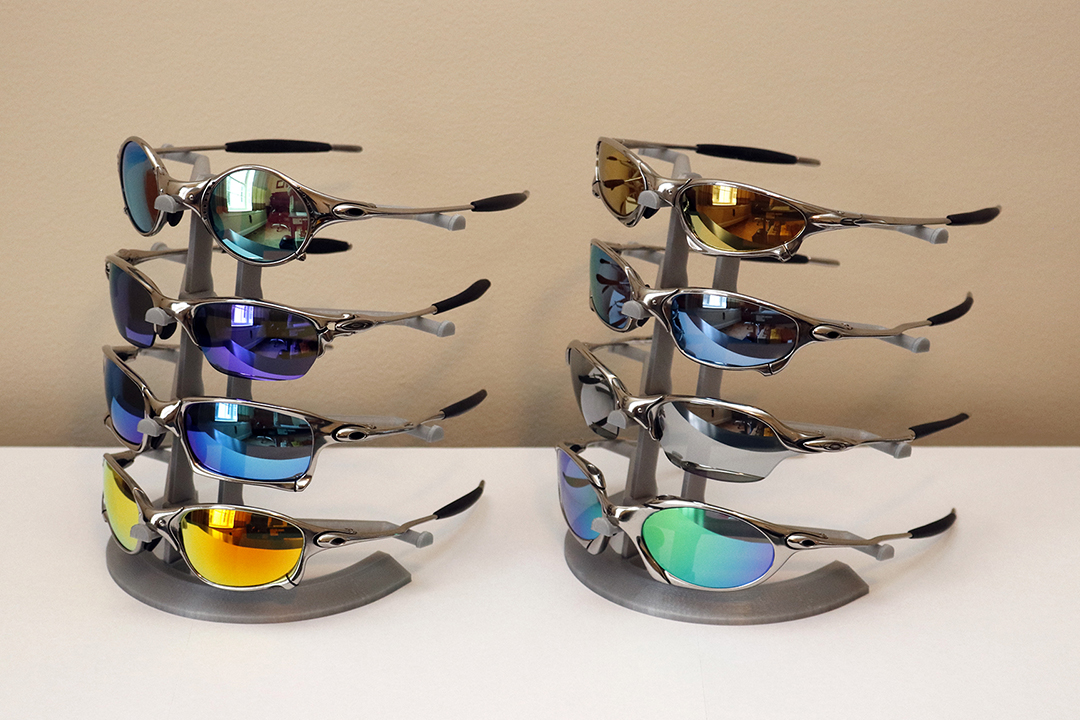 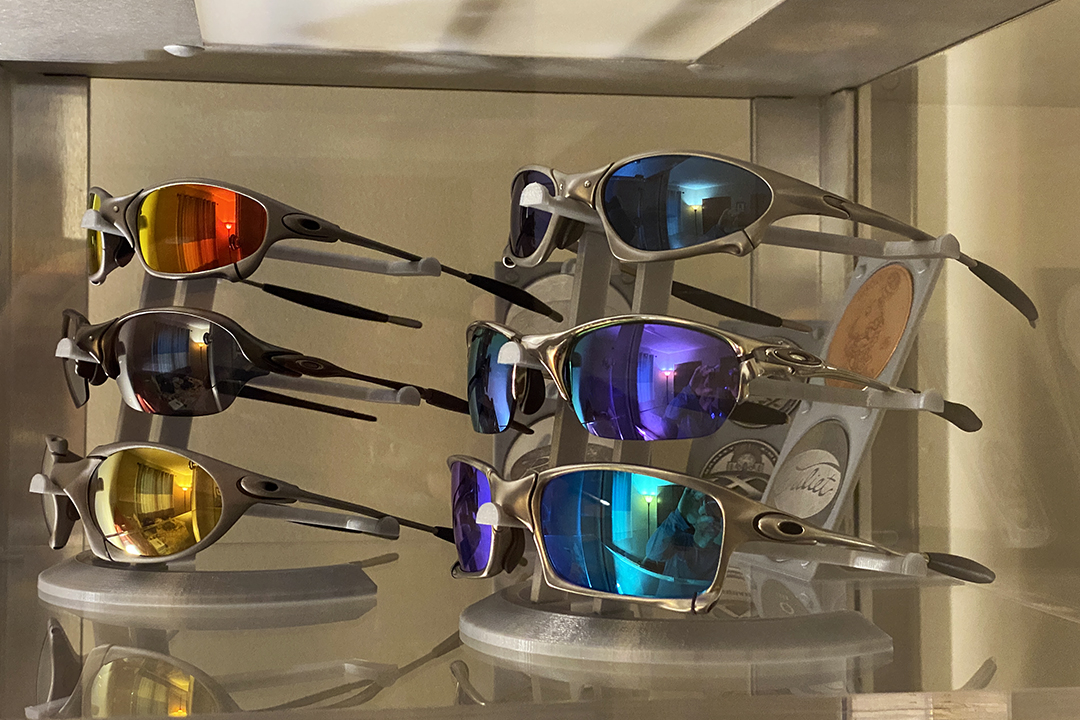 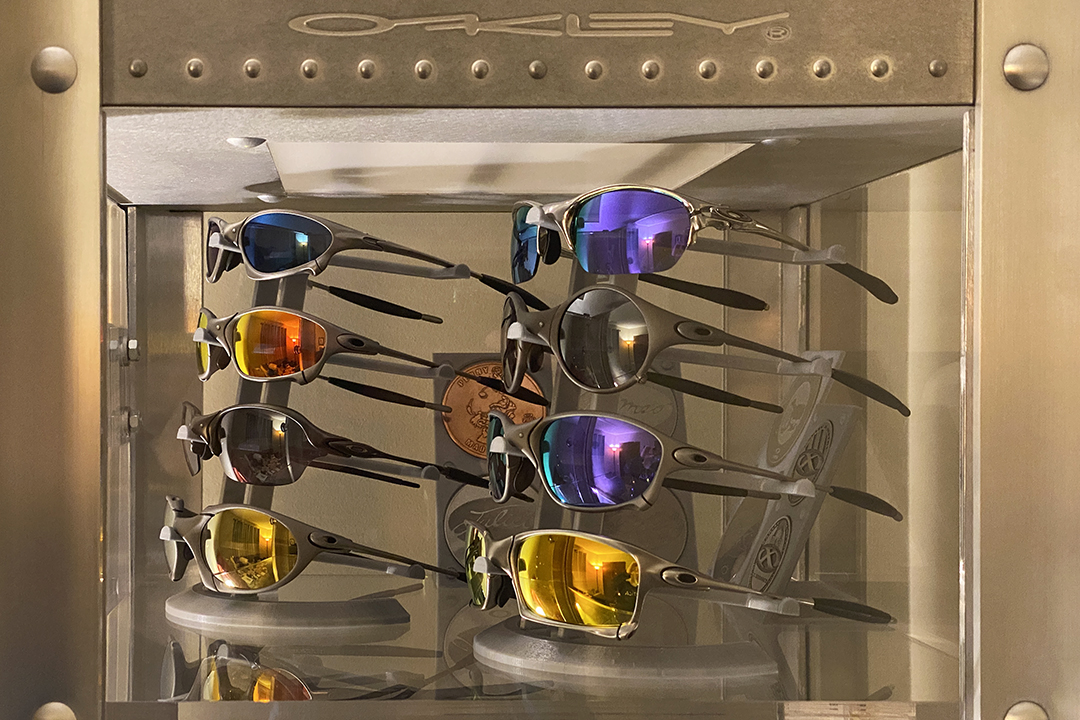 X-Metal sunglasses also came with collectible coins.  Here is a pic with a variety of X-Metal coin models. 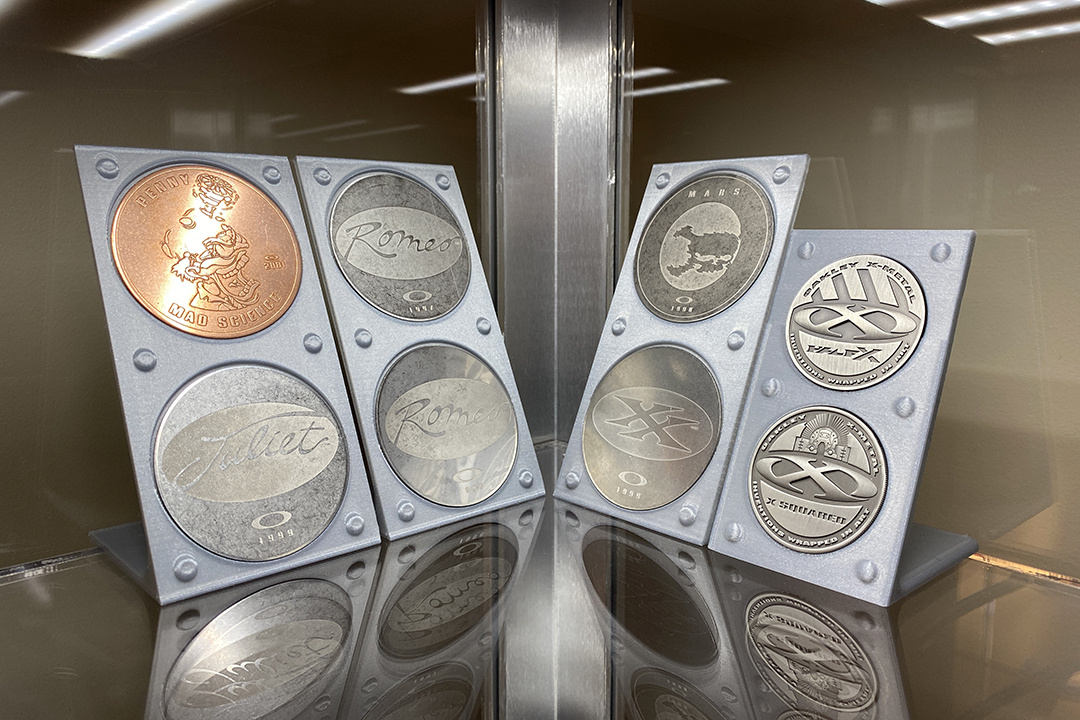 In 2015, Oakley introduced "X-Metals" again, but unfortunately, they were not made from the original 90% titanium castings, but from aluminum and plastic.  While the Madman and Badman were not well-received by all Oakley enthusiasts, I really like the way they look and feel.

Here is a group shot of a Madman, several Badman, and several Magnesium pairs. 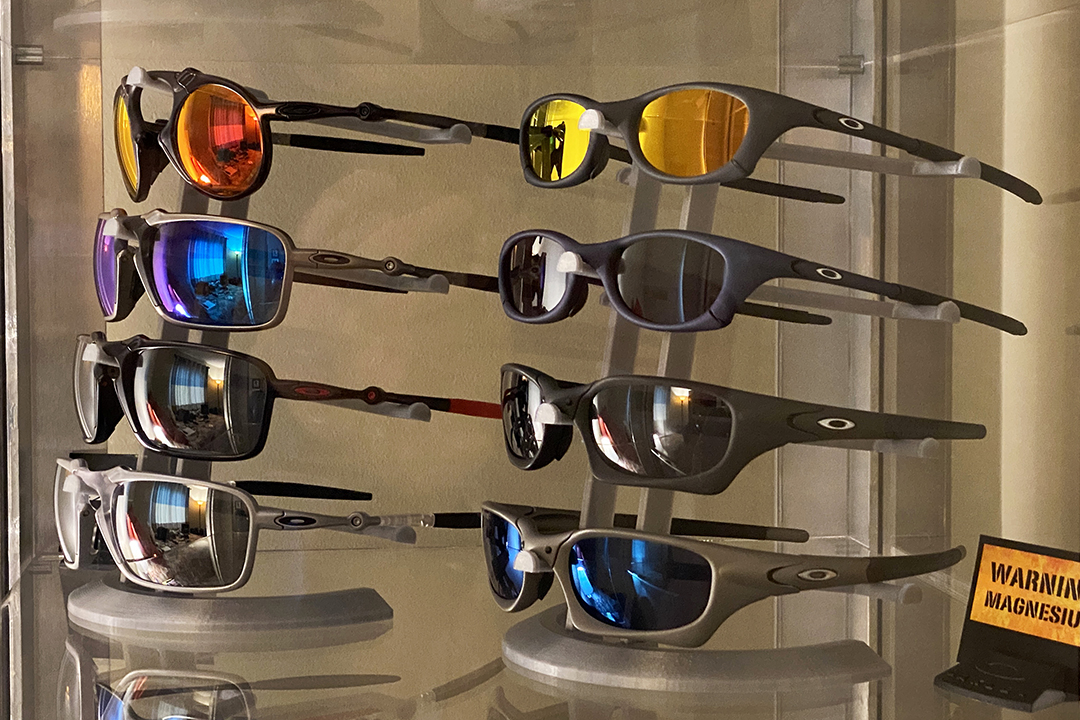 Oakley Wire sunglasses were introduced in 1992, and are still offered today in contemporary designs.  Here are some of the older, iconic Wire models.

Hatchet (2004), considered a Wire, this model is highly collectible and sought-after by many enthusiasts.  Hatchets are known for their bold style and weak temple spring hinges.

Here is a pic of a bunch of Matt's Oakley Wire sunglasses. 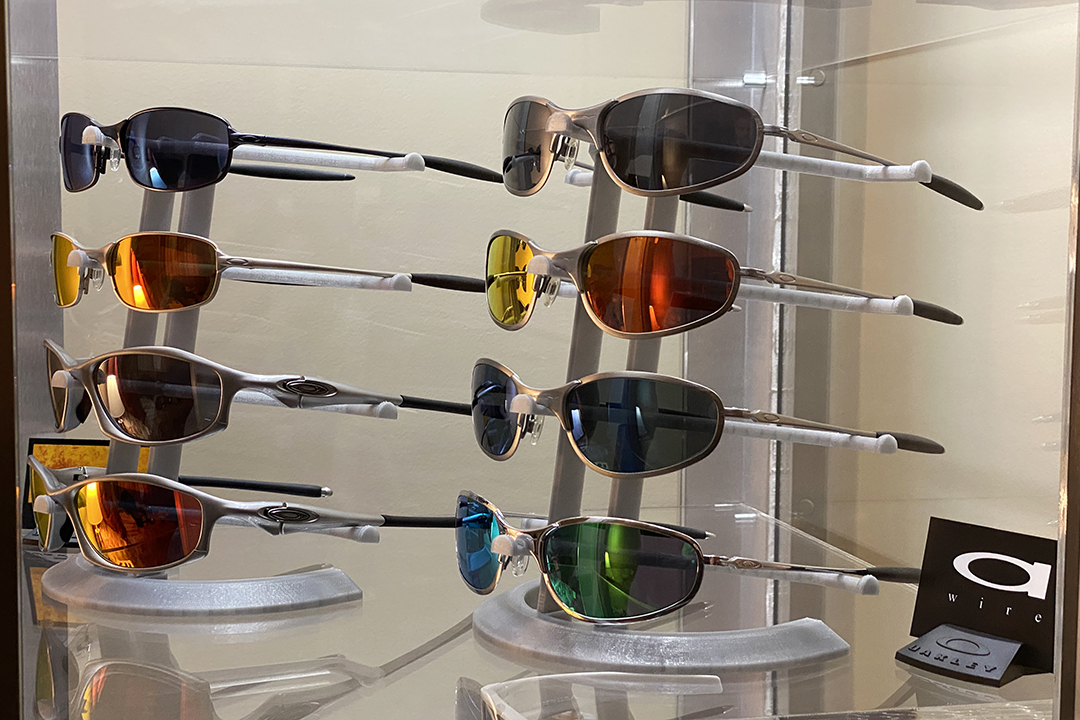 Here is an updated pic of Matt's A Wire 2.0 Thick sunglasses, all with custom-cut Oakley lenses.  The Iridium lenses from top to bottom are 24K, Fire, Torch, and Emerald. 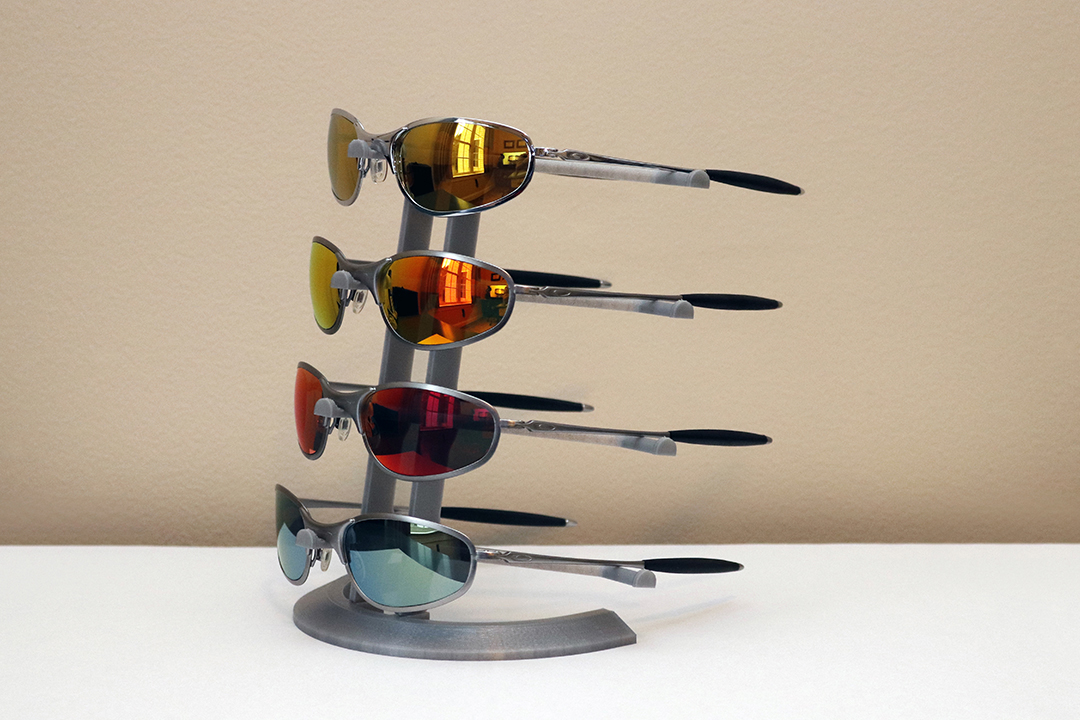 Many of Oakley's sport sunglasses are made of O-Matter, which is a nylon composite that is durable, flexible, and sweat-resistent.  Earlier versions of O-Matter became more brittle with age, making older pairs fragile, and in some cases, deteriorated beyond repair.  The current version of O-Matter is reportedly more resilient and age-defying.  Here are some pics of Matt's favorite O-Matter-based Oakleys.

Sliver Stealth (2018), one of Matt's favorite designs for driving.

Here are a couple shots of some of Matt's O-Matter Oakleys. 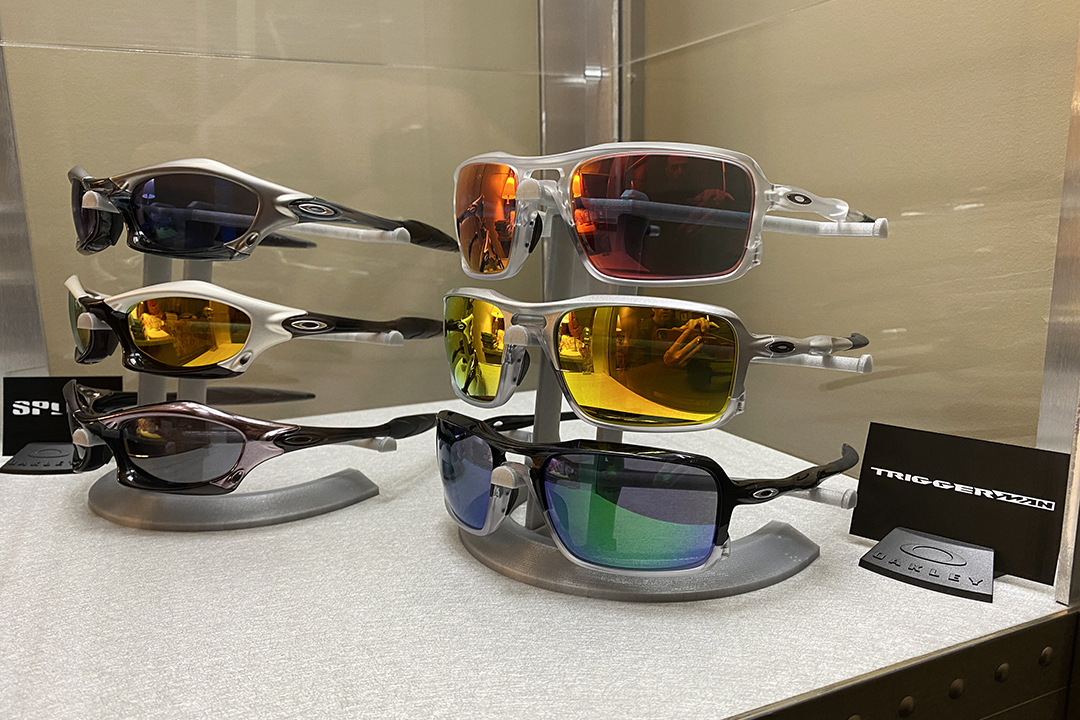 Here is an updated shot of all of Matt's Monster Pups and Monster Dogs.  Most of these were custom-painted by various Oakley artists. 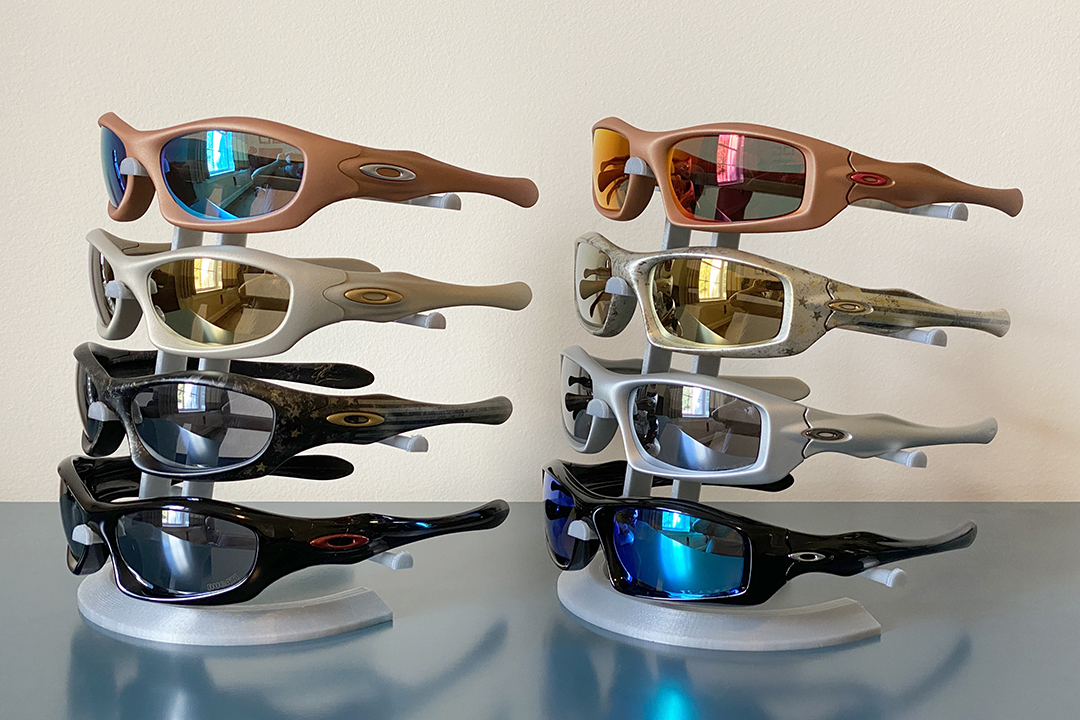